September: Fireworks and Processions in Leon

Nicaraguan culture is steeped in history and religious tradition, and Leon is not the exception.  September is the month when León celebrates its Patron Saint, the Virgin of Mercy, and also the procession of Saint Jerome takes place. 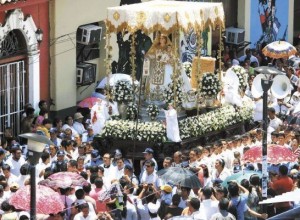 The Virgin of Mercy.  Officially proclaimed as León’s patron in 1912 by the Bishop of Nicaragua, although the tradition went back a long way before then.  Spanish missionaries brought over the “image” in 1792.  In the two and a half centuries that is has existed in León, the image has remained pretty much intact.

On the 24th of September, the streets of León are adorned with flags, flowers and balloons, and many houses portrait beautiful altars dedicated to the Virgin of Mercy.  Fireworks and serenades are a common sight during this festivity, which is attended by hundreds of people.

Saint Jerome.   Celebrated the 29th and 30th of September with folk dances amid a sea of blazing colors, the procession of Saint Jerome has become one of the most popular religious celebrations in León .  There are in fact two processions, the first one takes place of the afternoon the 29th, carrying the image from the Cathedral to the church of Sutiaba where it remains overnight, and the following morning a second processions returns it to the Cathedral.

To the sound of drumbeats, a multitude dances rhythmically with serpentine movements, following a few dramatizations of “El Toro Huaco”.  Heading the procession are the Indigenous Council of Sutiaba, and members of the National Police provide security.

Saint Jerome was born at Stridon around 347, a territory of the Ancient Rome that currently is located in Croatia.  Jerome translated the Bible from Greek and Hebrew to Latin, and his version was called the Vulgata (the people’s edition), which was the official biblical text used by the Catholic Church until 1979.